This letter was written by 40 year-old John Thomas stark (1821-1893), a native of Preble county, Ohio, who married Martha Ann Skidmore (1831-1863) of Lafayette, Indiana, in the late 1840s. John and Martha forst lived in San Augustine county, Texas, but moved to Burkeville, Newton county, Texas about 1850 where he read law and ran a mercantile/post office in the town.

After Texas seceded from the Union, John enlisted in Co. H, 13th Texas Cavalry (Burnett’s) or 13th Mounted Volunteers. The regiment was raised in eastern Texas, during the winter of 1861-1862 with about 900 men. In the summer of 1862, it was dismounted and assigned to O. Young’s Brigade in the Trans-Mississippi Department. They fought in various conflicts in Louisiana and Arkansas including the Battle of Jenkins’ Ferry. It disbanded in the late spring of 1865.

Upon its formation, John Stark was elected the First Sergeant of Co. H. When Capt. William Blewett died in Little Rock two days after this letter was written, John took over as Captain of the company and filled that role until 25 February 1865.

I had written a letter to send by Mr. [John T.] Smith but concluded that he would not start for several days and send it off by mail but I must write you a few lines more for fear you might think like I do sometimes when someone comes up from Newton County and does [not] bring me a letter. We are still in the same camp that I wrote from last but the name has been changed. ¹ I don’t recollect whether I wrote what regiments were in our Brigade or not but if I did, I may have been mistaken as there has been a good many changes. Ours is composed of first [Overton] Young’s, [John] Burnett’s, [William B.] Ochiltrees, Hubbard’s and [George] Flournoy’s, commanded by Col. Young as Senior Colonel. ² We are drilling pretty hard now. Reveille 5 o’clock, Surgeon’s call 5½, Breakfast 6½, Officer’s drill from 7 to 8, Company drill from 8 to 10, dinner 12, Battalion drill from 2 to 4, dress parade sunset, tattoo 8, taps 9½ o’clock.

18th—I began my letter last evening but it got so dark that I could not see to finish and Mr. Smith concluded to stay several days longer. I shall keep my letter open till he goes.

The men who went home have not returned yet and no word of them since Hancock left them. I am still the only officer with the company. We are getting along finely with our drill. The boys seem to begin to take an interest in learning. In fact, I think that they already excel in performance of the company evolutions. I meet with a great many acquaintances. Hamp Norwood came up and shook me by the hand the other day. I should never have known him. Col. [William B.] Ochiltree invited me over to see him. I went on Sunday evening last. While there, I had the honor of another introduction to [Brig.] General [Henry E.] McCulloch. ³ He is one of the plainest, most unassuming men I ever met, together with firmness visible in every feature of his striking countenance. He asked me many questions about our regiment & company and without appearing to do so, gave me a great deal of advice.

The officers of the different regiments now encamped around and near here were last week invited to attend the levee of Major Gen. [Theophilus H.] Holmes and I, of course, went up with the rest. The General is a man of very commanding appearance. He is about 6 feet 2 or 3 inches in height and large in proportion—about fifty years of age—a little stoop-shouldered as very tall men are apt to be. His iron grey hair and beard give him a venerable appearance. He is rather hard-featured and lines of deep thought, firmness, and decision plainly to be seen. He made us a long speech. Told us in plain words what he required of us and gave us plainly to understand that we must come up to the mark.

The Army of General [Samuel R.] Curtis, the Federal General, is said to be on White River, some 50 to 75 miles from us and we all hope one of these days to hear the word “forward march” to attack him and learn him the danger of lying too near to Texians. I feel no doubt now but that if we have the chance to meet the daring invader of our country, but that the Newton boys will give a good account of their part. Our only fear is that they may escape and we be deprived of the opportunity of giving him the drubbing he so richly deserves.

The last paper tells us that our Army under General Kirby Smith has possession of Cincinnati, that the enemy have sustained another overwhelming defeat in Virginia and are driven from the state [2nd Bull Run], [and] that Washington and Baltimore are ours by this time. Men here are offering to bet largely of peace being made before Christmas but I cannot believe it. We did not feel like giving up because they took our cities. On the contrary, we were only aroused to more vigorous prosecution of the war as this camp plainly shows.

but I must close for the present. Someone will be detailed soon to go home after clothing. I think Capt. [William] Blewett will go. Everyone is anxious to be the one. It is true that nothing would give me more pleasure than to see my darling once again but I cannot say that I am anxious to go now for I think that I can by waiting a little longer, get to stay longer when I come. I think you may look for me by Christmas. I shall try mighty hard to spend my Christmas at home and I think I can make it easy. Give my kindest regards to all enquiring friends and my best love to Franny and the children.

Ever truly yours, — John T. Stark

¹ The encampment was called Camp Hope before it was changed to Camp Holmes [and still later Camp Nelson]. It was located near Austin, Arkansas, about 25 miles northeast of Little Rock. The 13th Texas Cavalry arrived there on September 9th, having been dismounted and walked the last 200 miles through southern Arkansas. [Regiments were ordered to be dismounted because of the lack of forage.] The men of the 13th Texas Cavalry marched through the streets of Little Rock on September 6th 1862.

³ Brig. General Henry E. McCulloch had command of all the Confederate forces in northeast Texas. He was a brother of the more famous Ben McCulloch. 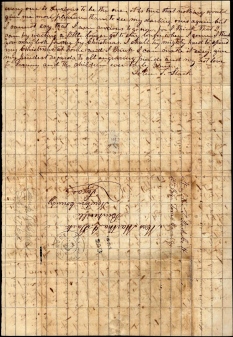