This letter was written by Elizabeth Kirk (1821-1911) of Salineville, Columbiana county, Ohio, to her husband, 40 year-old Pvt. Henry Barcus (1824-1864) while he was serving in Co. A., 143rd Ohio National Guard (O. N. G.). Henry and Elizabeth were married on 27 June 1844 in Jefferson county, Ohio. In the 1850 US Census, Henry was identified as a miner. In the summer of 1864, during Grant’s Overland campaign, the 143rd Ohio National Guard was placed into active service for 100 days started on 2 May. Most of that time the 143rd O. N. G. garrisoned the Union fortifications at Wilson’s Landing on the James river, which is where most of these letters were written.

Though they were never in battle, the 143rd Ohio National Guard suffered several deaths from dysentery and other diseases—poor Henry Barcus among them. Henry died at the very end of his term of service suffering from dysentery. He kept the deteriorating condition of his disease from his wife as long as he could but finally revealed his true condition in the last couple of letters he wrote home. The register of military deaths reports that he died of diarrhea at  Patterson Park General Hospital in Baltimore on 31 August 1864, leaving a wife and six children born between 1844 and 1858. His wife applied for a pension on 18 November 1864.

I take my pen in hand to let you know that we are all well and hope that these few lines may find you enjoying the same blessing.

I started a letter to you the day that you left Washington with some money and some goldenseal for your sore lips. This is the fourth letter we have written you and you say you haven’t received any yet.

Times here is hard as everything is as dear again since you left—only floor is the same [as] it was. I don’t feel like murmuring. If you were only here. I will for this time. The children all join me in sending their love to you. Write soon and often for your letters is all that is bracing me up. I remain your friend, — Elizabeth Barcus 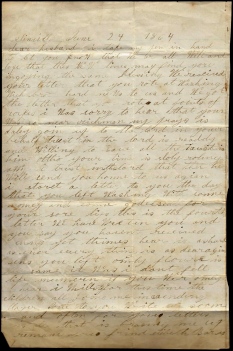 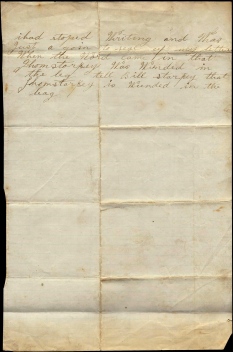