This letter was written by James Nisbet LeConte (1834-1862), the son of William LeConte and Sarah Angelina Nisbet. James was born at Cedar Hill Plantation in Liberty County, Georgia. After his father died in 1841, he and his mother and siblings moved to Macon to be near their Uncle, Judge Eugenius Nisbet. He graduated from Franklin College (University of Georgia) in 1853 and then attended and graduated from The Jefferson Medical College of Philadelphia, PA. He was admitted membership to the First Presbyterian Church in Macon 10 June 1956. In 1858, He settled in Rome, GA to practice medicine. On April 22, 1858, he married Mary B. Gordon of Columbia, TN. He died of tuberculosis at the age of 28 years at his residence in Dade County, GA.

Since James’ father and step-father were both dead by the time of this letter, it must have been written to his father-in-law, George Washington Gordon (1801-1862) of Vicksburg, Mississippi.

I have neglected writing you much longer that I intended. In fact, I intended writing every night since your letter came. My neglect mat be the cause of your losing an opportunity to make a good purchase for us. For a month I have thought of nothing scarcity but the position of our country. The continual arrival of telegrams from Charleston and Savannah keep up a constant excitement. The military companies are equipping themselves expecting every day to be ordered to Savannah to prevent invasion or relieve the guard at Fort Pulaski.

The seceding party have 50 majority in the convention which decided Georgia’s position. The last day or two have brought the news that Mississippi, Florida, [and] Alabama, have adopted a secession ordinance—and Louisiana will soon do the same. All the forts on the coast of these states are in possession of these states, determined to hold them at all hazards.

Next week we expect to go to Liberty County to spend several weeks. We will not get home till April. By that time I hope to be well. Willie was here Christmas. We agreed to write you to buy a jack for us. We do need one very much.

Much love to all for us. Affectionately, — James LeConte 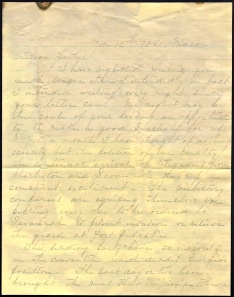