The grape vine has been in constant motion for the past six or seven days. Rumors of divers and sundries kinds are circulated through the camps in regard to what disposition will be made of the Veterans. I think that time alone can solve the problem. Governor Stone is now at Washington supposed to be making arrangements for transporting the Iowa troops to the state. I hope that we will be mustered out soon for I can see no reason why they should discharge the recruits and keep the Vets.

I see by the [Vinton] Eagle that R. Adams is dead also a notice of the death of Capt. [Thomas] Drummond. ¹ In connection with the death of Mr. [Milton P.] Adams, I saw an article purporting to come from a citizen recommending our old friend Fred ² as a good man to fill the vacancy now  existing in the Recorder’s Office. I think that such a movement would receive the hearty support of almost every loyal man in the county. I am confident that Company G would give him their hearty support. Fred deserves it and what little influence I may have amongst my friends and the company will be used in his favor. In connection with this, I desire you to remember me to Fred and ask him why the devil he does not send me my [news]paper.

We are camped now upon the ground that the papers say was wont in former times to echo and tremble beneath the feet of the victorious “Onward to Richmond” Army and now while the land is inhabited by “Sherman’s Greesers,” “all is quiet on the Potomac.” I suppose that we will cut a —– at Washington on the 24th. ³ We are then to be reviewed by the President and General Grant. People are gathering in from all parts of the country to see the grand sight.

Remember me to Mrs. P. Also to anyone who may make any inquiries about yours truly, — Capt. James E. White

Remember me to Uncle Johnny and also take a glass of lager beer for me. I have not enough money on hand to procure the above mentioned article. — Jimmie

¹ Capt. Thomas Drummond, also from Benton county, Iowa, was in command of the 5th U. S. Cavalry when he was fatally wounded at the battle of Five Forks, Dinwiddie County, Virginia. A letter from the Chaplain of the 5th US Cavalry states: “Captain Drummond’s conduct was noble and heroic to the last and he rejoiced to know that he died as a soldier and a patriot. As he was borne from the battlefield in an ambulance he articulated the Latin words “dulce et decorum est pro patria mori” – it is pleasant and honorable to die for one’s country. Captain Drummond lived from 11 a.m. on the 1st, the time he received his wound, until 8 a.m. on the 2nd. Before becoming insensible he talked very freely of his spiritual condition and felt himself reconciled to die.”

² Frederick (“Fred”) Lyman served as the Benton County Recorder from 1866 to 1868. Fred was the editor and publisher of The Vinton Eagle, the first newspaper to be placed in circulation in Benton county, Iowa. 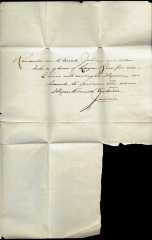