This letter was written by someone named “J. A. H.” of Davidson County, North Carolina, to Constantine Alexander Hege (1843-1914) who served in Co. H, 48th North Carolina (Confederate) Infantry. Constantine was the son of Solomon and Catharine (Guenther) Hege of Davidson county. The author may have been a relative such as an uncle, though the handwriting looks suspiciously like his father’s. 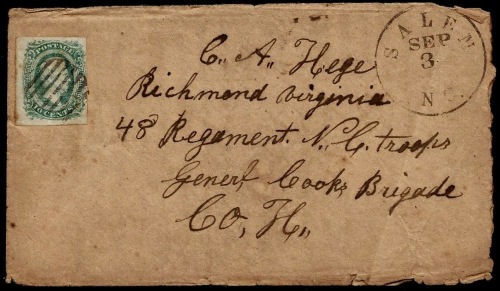 Inasmuch as you have been in the army some over twelve months forced to go against your own will or the will of your Father, notwithstanding your father having hired a substitute for you in the draft who volunteered for the war and went into service, it is not lawful to retain you in service and yet you was forced to go like others who had substitutes in their place and of late there has been a great deal of money spent in carrying such cases before Judge Pearson by lawyers and some have got discharged from the army who had hired substitutes in the draft who had not been paid any money.

Tis true they were at home when the case was carried to the judge. The fair thing is the fair thing. Now what should hinder your Father from getting you out on the same principle. Tis true you are in the army and have been paid some for service those were looking about home & Hege & E. Brinkley are cleared by Judge Pearson according to law. You ought to have the same chance and more so being you served for 1 year—they did not. If you could only get a furlough to come home or into North Carolina, I think there would be money freely spent for your case. It is so supposed by me.

In a letter you sent a few days ago to your Father, you wish to know how and what to do (having hired a substitute) to get out of the war. Your Father has counseled with a number of lawyers on that point months ago. Some say because you received pay, you cannot get out. Others say they have no right to keep you in the army, you having a substitute in your place no matter what age he was. They say if you was at home, they could take you before Judge Pearson and he, according to law, would clear you from the army by suing out a writ of habeas corpus. Your Father is anxious for you to get a permit or furlough to come home. That is all he wants.

All he wants is for you to come home or into North Carolina only and he will see what he can be done. He would spend money freely to have you out of the army if it is possible. Therefore he is very desirous that you might come home.

You best had keep those things to yourself. If the officers find out that you want to get out, they will be meaner to you and not let you get a permit to go home and in Virginia your Father cannot sue out a write of habeas corpus. So you had better plead for a permit to go home to see your Father who is in very feeble health. Likely they would let you go to see your sick father. 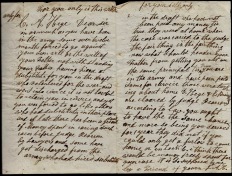 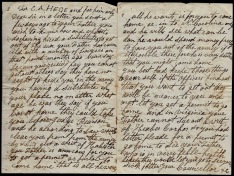