This letter was written by Dr. William Moye Benjamin Brown (1823-1903), the son of Willie Brown (1799-1867) and Nancy Moye of of Greenville, Pitt county, North Carolina. Dr. Brown was married in 1854 to Jane Marie Greene (1825-1899). In the 1860 US Slave Schedule, it appears that Dr. Brown owned 13 slaves ranging in age from 2 to 34. I infer from this letter that the slaves who names and ages appear on the following list had sought refuge with the Union troops quartered at Plymouth, North Carolina, until they were apprehended when Gen. Robert F. Hoke recaptured the city in April 1864. The slaves were, as indicated, the property of Dr. Brown, his father Willie Brown’s, and his relatives, Robert and Zeno Greene’s. [A large collection of the Brown family papers are archived at Easter Carolina University in Greenville.]

Dr. Brown wrote the letter to Col. George Washington Wortham (1823-1883) who began the war as a Captain of the “Granville Greys.” “He was commissioned as a major in the 50th Regiment of North Carolina on 15 April 1862, and promoted to lieutenant-colonel on 01 December 1862, then to colonel on 10 November 1863. Wortham was placed in command at Plymouth, North Carolina after its recapture (May-October 1864). In late 1864, Wortham’s regiment was ordered to assist in the defense of Savannah. They subsequently fought at River’s Bridge, Averasborough and Bentonville. (In the latter battle, Wortham, is said to have “shown the white feather,” fleeing to the rear to “report the disaster.” Meeting a brigade courier en route, he described the battlefield deaths of Colonel William Hardy and several other officers, all of whom were subsequently found alive, though bloodied. See Nathaniel Hughes’s Bentonville: The Final Battle of Sherman and Johnston, UNC Press, 200, p. 148.) Wortham was paroled on 01 May 1865 in Greensboro, North Carolina and returned to the practice of law.” [Archives, Collection of George Wortham, Gilder Lehrman]

Also mentioned in the letter is Major William E. DeMill who was in the North Carolina Commissary Department.

Will you please inform me by mail if the negroes named on the enclosed list are among those captured at Plymouth by Gen. [Robert F.] Hoke [in April 1864]. I learn from Major [William E.] Demill that the list of them is completed and their owner’s names given. Attention will much oblige. 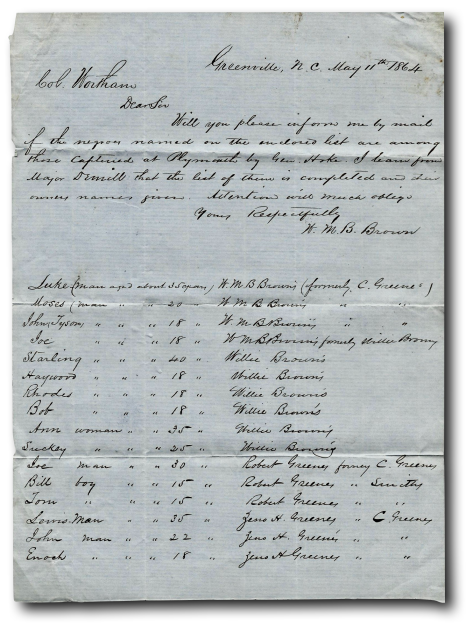