Bill served in Co. F, 9th Rhode Island Infantry. This regiment was organized at Providence on May 26, 1862. They moved to Washington, D. C., by detachments, May 27 and 29. Duty at Camp Frieze, Tennallytown, till July. Moved to Fairfax Seminary, Va., July 1. Garrison duty in the Defences of Washington till September. Company “A” at Fort Greble, “B” at Fort Meigs, “C” at Fort Ricketts, “D” at Fort Snyder, “E” and “K” at Fort Baker, “F” at Fort Carroll, “G” at Fort Dupont, “H” at Fort Wagner, “I” at Fort Stanton and “L” at Fort Davis. They mustered out of the service on September 2, 1862.

It is now some days since I last wrote you and I began to think it was about time I wrote again. So seating myself under the trees I commence. I received my things by Northups box in good order but had a little rather have not received them at all. After I received your letter stating that you would not send then till you heard from me again, I sat down and wrote that George L. wanted some things sent and that we had concluded to have them sent on together. I think you did not get the letter in time or all would have been right. I wish all was right now. When the box came, I did not expect anything in it and was out of the tent and some of the boys called me in. He was taking the things out of the box and everyone of the bundles marked for me, he would either swear at me or the things & ask why I did not have the box sent to me. In vain I told him I had ordered otherwise. He did did not or would not believe me and this morning some of the boys said something in regard to it and he got so mad that he wanted to fight & cursed me up hill and down. I told him I had nothing to fight him for but at the same time to keep his hands off. He did not trouble me at all.

At first I said I would pay for half the box & offered it to him if he would change a bill but he would give me no answer and there it remains. Over in Camp Frieze, he wanted to borrow $2 and I let him have it. I was sorry I did so immediately for I remembered I had heard him called bad pay. Well it ran along some three or four weeks and the boys kept twitting him of it and I dunned him several times & got no pay. So when I went to Washington, I asked him again. He then let me have it and damned me because I asked him & turned to go but came back saying he wanted a portfolio and handed me 25 cents. He did not want me to pay over 37 for it and promised to pay the rest. I got him one and paid 37 for it but have not seen the 12 cents yet.

I have made up my mind to wait my own convenience and when I do pay it, dun him for what he owes me & never have any dealings with him afterwards. He is not liked in the company or even in the mess and there is several fellows in the camp that only give them provocation would kill him. I myself am none afraid of him or getting hurt by him. I tried as hard as I could to treat him well but he will get mad at a slight thing and he may keep mad now. He was turned out of Co. D, 10th Regiment on account of his meanness. But I shall tire your patience with Ruf[us] Northup and I will write something else. Say nothing to Mrs. Northup to hurt her feelings and don’t worry yourself for I am alright.

I am on guard today so I have time to write a little. Everything goes on the same at the Fort except the turfing which the Engineers are doing now. 14 men are detailed every day to work. I was on yesterday. Had an easy job and did not work but little over half a day for it rained. All I had to do was to pass tools.

My sugar goes well on tomatoes. George L. and I will get a dozen and cut them up in his pan and make a meal of them. The cake and snaps are first rate too. The snaps taste like the coconut cookies I got at the Capitol. I only wish there was more. Change is dreadful scarce around here. In the city you have got to buy a dollar’s worth or nothing and around here you must get 25 or 30 cents worth. Postage stamps are current.

We hear very little news here and don’t know nothing about the war. Heard the other day that Richmond was taken. Don’t know whether it is so or not. Hear today that a Massachusetts Regiment is coming here and that we are going to leave. We are going to start for home about the 20th. The Colonel wants all who want to go in the 7th to enlist here. He won’t get many. Are they drafting in Rhode Island yet? I should think that a hundred & six was a large majority for Warwick and would leave it destitute. We boys have got rid of the draft & won’t have to go again. If ever I enlist again, I shall go in the Navy.

My health is good and I am in hopes it will remain so. I have not done as many have—played sick, I have not been excused [from duty] but once & then from only one drill when I had the headache. I have had letters Willet J. J. H. Fairbrothen, Henry S. They fare much worse than we do, Coffee, bread, & salt junk twenty-one times a week. Regular rations at that—no deviations. When they are on the march, nothing but junk & bread do they get. They went from the tenth day of March till the 1st of June without seeing a piece of soft bread. I shall not grumble anymore [even] if I did make a dinner out of a piece of toasted soft bread, no butter, & a cup of coffee, with stewed green apples. Good dinner that.

When I received their letters, they had 20 days rations packed, six new teams, and a new armament of 12 lbs. U. S. guns, & under marching orders.

A man in Co. K died this morning. He had been off duty a week and in the hospital three days. He was injured fooling [around]. News came last night that a number (20) English gunboats entered the harbor of Mobile.

Give my respects to all the Phenix folks & friends. Write soon or I shall not get it. Kiss Lill for me. Tell Em I shall write to her soon. 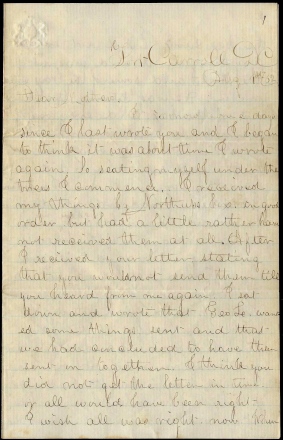 I received your letter 30th this eve. and thinking you would want to know about the things as soon as you could, I will write now. I wrote yesterday and told you all about the box. George got a letter today and said he was going to have a box and some things in it for me. I have not sent yesterday’s letter and will enclose this one in it. I did not send it on account of not having any stamps. I am very much pleased with them. I shall write often now. I want the Sweet Oil to keep my gun in order. It rusts without it and they don’t furnish any or hardly enough emery paper to clean it so if I don’t have something to clean it will rust. I shall not write for anything more before I come home.

What do you think we had for supper? A piece of sour bread and a cup of tea. Salt junk for those who wanted it (I didn’t). I had some snaps (I received all but the apples. I have not seen them yet). I have done my washing today—a short, 2 pair stockings, 2 handkerchiefs, haversack bag, towel, &c. Tomorrow I will go to the Potomac and wash all over How are Phenix folks? Tell Chris to write soon. I shall write to Em tomorrow. This is all I think of now and I close.

Write as soon as you receive this. 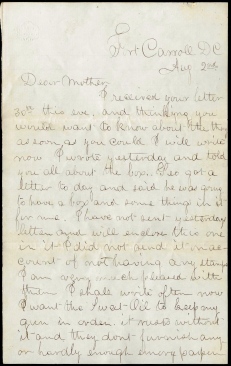 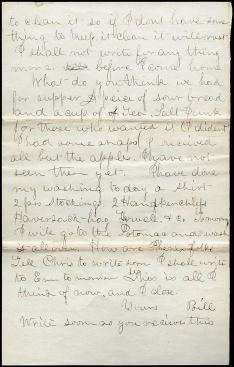