Capt. James Harvey Greene of the 8th Wisconsin Infantry was with the regiment as part of Polk’s Army when they crossed the Mississippi river into Kentucky to “assist in the pursuit of the flying rebels after the evacuation of Island No. 10” in April 1862. As a memento of the occasion, Capt. Greene picked up a few papers that were left “on the field” by the rebels. Two of the papers were letters pertaining to the 55th Tennessee (Brown’s) Infantry which have been previously published here. Another paper was a ledger page—tattered and worn from frequent folding and unfolding—that captured the “Rules and Regulations” to govern a cock fight that was to occur at the race track in Natchitoches, Louisiana, on “16 March instant,” presumably in 1862.

Today there is nothing but a pile of 16 fragments of this ledger sheet which I have attempted to piece together and transcribe though I believe I am missing several more pieces and only the top portion of each side appears to be complete. It is sufficient to give the gist of what the cock fighting rules were at the time although these have probably not changed much in the last 150 years. Cock fighting seems to have been a favorite sport among soldiers, in particular, for hundreds of years. It is said that the sport was even practiced by the Greeks before battle in order to stimulate the warriors to brave and valorous deeds.

Rules and Regulations to Govern Fighting of Cocks at the meeting to be held at the Natchitoches Race Tract [Track] on the 16th March Instant.

Subscribers will at or before 10 o’clock on the morning of the day appointed furnish to the Judge of the day a list of their cocks describing their respective colors and exact weights. The cocks exceeding six pounds in weight being registered as Shake-Bags and not entitled to be registered.

The cocks being registered, will be matched by the Judges, the matches being made in every practicable case of cocks of equal weight precisely. When this will be impossible, then the matches will be made of cocks differing in weight one, and not more than two ounces, except in reference to the Shake-Bag cocks, which will be matched against each other without regard to weight.

The matches being made, will be registered and numbered and will be announced by the  Judges; —

The Battles so arranged shall be settled by the Judges and shall take place in the numerical order previously indicated; none being called before 10 A. M. nor after 5 P. M.

The matches being called, the cocks designated will be brought forward and weighed by the Judges. They will then be prepared for battle, trimmed or not, and armed with Gaffs [metal spurs or knives] of any size or length at the discretion of their owner, but the Judges will see that all the Gaffs have no other than round points, disallowing any with flat or chisel points, or with cutting edges like Slashers.

The Cocks being ready, the Pitt will be cleared and no one allowed to remain inside of it but the two Pitters. The cocks are then presented to each other, in hand; and may be allowed to Peck each other once or twice, the Pitters being respectively responsible that hte cocks escape not from their hands, as any injury resulting to one of the cocks by such an accident would forfeit the wager staked, to the backers of his adversary. The cocks are now put down facing each other at a distance of not less than three feetm and as much further as the Pitters may think proper.

The Pitters will keep close attention to the fighting, so handled and put down breast to breast, and if there [  ] no fighting, the battle shall be decided as being won by the cock that made the last fight.

Should either cock die, during the observance of time, or during a count, the surviving cock is the winner.

It sometimes happens that cocks are thrown upon backs, or falls in such a manner as to have neither wings under their bodies. In such cases, Pitters are entitled to turn a cock that is upon his back or to place under his body a wing that may be stretched out upon the ground, but this must be done without handling or lifting the cocks. In the handling of the cocks, it must not be understood that Pitters are entitled to keep them in hand for any indefinite time at their own discretion, but only so long as to clean of their Gaffs, remove from their back any feathers that may be sticking there, and if necessary, to relieve their throats of blood for all of which a very few moments of time will be sufficient.

Gaffs broken in battle can not be substituted nor will slinging cocks to relieve then of blood in the throat be allowed. All bets offered and accepted during a battle are good whether the stake was opposite or not, and are payable immediately after the battle. 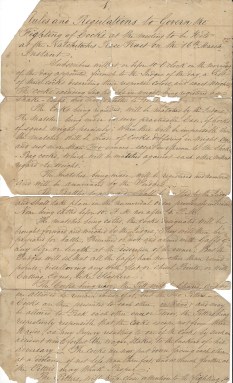