He wrote the letter to his future wife, Julia Sophronia Allison (1845-1907)—a woman he feared so much that he wrote he’d rather face “Vicksburg’s frowning batteries” again than “meet the storm” of her anger.

[Note: A transcript of this letter appears in “Under the Flag of the Nation,” edited by Otto E. Bond, page 136. In that publication, Bond spells Hopkins’ middle name as “Johnston” but family records indicate it was spelled “Johnson.”]

I have long been in doubt as to the true cause of your protracted silence and at last have concluded to ask the reason. I answered your last letter promptly and have waited in vain for a reply. At last a letter came from Mary [Knapp]—said you have been looking for a letter from me. This seemed strange and thinking my letter would certainly reach its destination in time, I did not write again. A recent letter from Mary says you are very angry because I do not write. This frightened me and I commence tout de suite [right now].

I, who have faced Vicksburg’s frowning batteries would gladly face them again rather than meet the storm of a woman’s anger. Grape & canister—shrapnel—Hotchkiss & case shot, minié balls, swords & bayonets are no where in comparison. Remember there is a certain class of individuals who congregate on the Mississippi and make it a business of breaking open the U. S. mail and reading the letters of gents & ladies—withal a very mean habit.

I have a letter from [my brother] Yourtee—is at Bermuda Hundred with General Butler. His regiment (the 130th O. N. G.) are principally all doctors & lawyers commanded by Charles W. Hill, ex A. G. O.  Brother wants to know whether I correspond with Miss A[llison] yet. Told him none of his business.

Weather here is not quite as cold as “Greenland” but we, us & co. manage to live assisted by the thought that our tern of service will soon expire and we can rest for awhile in some cool, shady spot in our old Buckeye State. The 4th [of July] which we celebrated so extensively last year was unmarked by anything of interest. A few shoulder straps made merry over a few bottles of Catawba but raised no excitement in camp & the sun shone down as hot as on the other days of the month. A portion of our Corps embarked on Gulf steamers a few days ago for [Brashear City] and we are waiting for orders to follow.

A grand prize drill was held on the 6th and the 42nd Ohio took the prize from every regiment in the 1st Brigade. Our regiment will drill tonight before General Lawler against the champion regiment of the 3rd Division. Think we can beat them. Every item of news is interesting from Grant & Sherman and we feel confident in the two commanders’ ultimate success.

The term of service of the 42nd expires in September. [We will] want plenty of refreshments at the depot when we land at Bellefontaine. Don’t think I will remain a citizen long if the war lasts. Like General Grant, I propose to fight it out on this line.

When you write, tell me what was the date of your last letter. Give my love to Mary and keep what share you please—all if you want it. I have left a kiss of reconciliation on the first page. If you find it, it is for you and no other. Perhaps tis near the flag. Write soon. Send your letters on the fastest train and steamboat. My pen acts like it had been out on a long campaign & wants to rest. Guess I will dismiss it from the service. Excuse brevity for “tis” the soul of wit and again, answer without delay.

Yours again, as ever. — Johns. 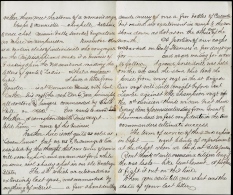