I feel reasonably confident that this letter can be attributed to Henry T. Blanchard of Co. K, 2nd Rhode Island Infantry. He served as Corporal and in May 1862 was promoted to Sergeant. Blanchard was killed on May 6, 1864 at the Battle of the Wilderness in Virginia. He was shot in the head and killed instantly. A captain, John P. Shaw stated that “his loss is mourned by everyone acquainted with him. He was every inch of him a soldier and a perfect gentleman.”

Henry was the son of Erastus Edmund Blanchard (1812-1894) and Elizabeth Jones Aldrich (1815-1894) of Providence, Rhode Island. Henry was a 21 year-old machinist when he enlisted. I previously transcribed two of Henry’s letters on Spared & Shared 13 and I note there are quite a number of Henry’s letters in archives and private collections as well.

I write a few lines to you in answer to your kind letter. We are camped today in a lovely place on Gen. Lee’s farm on which lay some 6 or 7 U. S. Gunboats—two of them lay in sight of us. We, the advance guard, have been doing one of the sauciest things of the war—having been chasing some 40,000 rebels before us for 30 miles, and some of the time there has been none of our troops within 20 miles of us. If secesh had known our foce, they would have no doubt given us a tough one, but they thought that there was a large force of us following them.

The troops forming the advance guard for the Grand Army of the Potomac is composed of the 5th & 8th Regiments of Regular Cavalry, 8th Illinois Cavalry, the 2nd Rhode Island Regiment, 98 Pennsylvania Vol., & Battery L of the 2nd U. S. Regular Artillery, which were picked by Major Gen. McClellan for this duty, thus showing that he has great confidence in us. The party is commanded by Gen. Stoneman of the Regular Army who has been chief in command of all the cavalry. Col. Wheaton is acting Brig. General. Gov. Sprague has been with us all the time, and I have heard that he said that the 2nd Rhode Island should be the first regiment of infantry to enter Richmond.

It is the general impression of all, and especially of the prisoners which we have taken, that the rebels will make a stand in Chickahominy Swamp about 12 miles from where we  now are, and 15 from Richmond. Some of the prisoners which we have taken are confident that we will get whipped, while others are as far the other way, saying that the rebels are discouraged and will not fight. But that remains to be seen. One thing is sure—that there is no retreat for us. We are bound to go on until the rebellion is crushed out.

You would laugh if you could see the negros crowd around our band Sunday while it was playing. They said they never saw or heard one before.

Until lately we have lived high on secesh pigs, bacon, & poultry, but Sunday an order was issued that any man caught foraging would be court martialed and punished severely.  The white part of the population are scarce around here, but there are any quantity of darkies. Every officer’s servant belonging to our regiment has got a secesh horse or mule & saddle and form quite a body guard by themselves.

I suppose you have heard of the capture of Norfolk &c. The first [we] heard of it [was] Sunday and there was great cheering in camp. The Monitor and several other gunboats are reported as going up the James river and with the help of those on the Pamunky river, with Banks & McDowell in the rear of the rebels, we might surround them. But none of us know Gen. McClellan’s plans though we have the utmost confidence in him and the other generals who have command of the army.

But I must close y letter for fear we will march before I get it in the mail for the gunboats are blazing away up the river, shelling the woods as they go along. I see in a paper yesterday an account of the sword you spoke of. It must be a splendid thing.

P. S. Direct as before 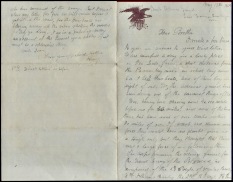 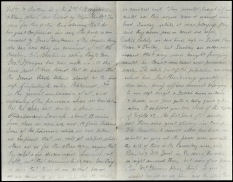