I have some news for you this time but I am sorry to say that it is bad for our army met with a reverse last night. I told you in my last that there was hard fighting on our left. Well it appears that our army took the South Side Railroad and then sent the 5th Corps on to the right and the rebs massed their men on the left and about 9 o’clock last night they commenced to attack our boys and drove them back, and if you could of only heard the noise of the big guns, oh it was splendid—that is, for us that had no part in the affair. But it must of been dreadful for the poor fellows that had to take part in it. It sounded as if someone was beating on a bass drum just as fast as they could.

I hope that it is not so bad as they say it is for every time the rebs gain a victory, it lengthens out the war and I for one want to see this thing over with for it is about time that we put a stop on Johnny Reb for it could of been done two years ago as well as not. And it would of been done if they had of let McClellan had men to do it with. But that would not do for he was a getting too popular and the Republicans were afraid of him so they let the war go on by not sending men to him. That is the reason of his failure on the peninsula.

But I must close this for want of space hoping that it will find you well for it leaves me in good health. My love to all. Write soon, my pet.

As ever your loving husband, — Chet 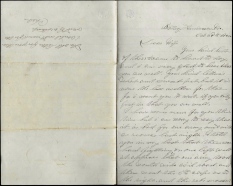