Transcribed here are two letters connected with the history of the 55th Tennessee (Browns) Infantry. What makes these letters interesting is not so much the content as the provenance. Both letters were picked up “on the field” by Capt. James Harvey Greene of the 8th Wisconsin Infantry when they, as part of Gen. Pope’s forces, crossed the Mississippi river to Kentucky to “assist in the pursuit of the flying rebels after the evacuation of Island No. 10.” This was the regiment’s first encounter with the rebel army and no doubt Capt. Greene wanted to preserve them as a memento of the occasion.

This first letter was written by Confederate Surgeon John Maclin Driver (1837-1893), the son of Henry Driver (1809-1892) and Elizabeth Carter (1816-1900) of Edgefield, Davidson county, Tennessee. Driver received his medical degree from the University of Nashville in 1857 and married Mary E. Traylor (1841-1913) the following year. He was practicing medicine in Camden, Benton county, Tennessee, when the Civil War began and first enlisted in late October 1861 as a private in Co. B, 55th Tennessee at Trenton, Tennessee. After receiving his appointment as surgeon from the Provisional Army of the CSA, he was ordered to report to 2nd Tennessee Cavalry Battalion (Jones) at Columbus, Kentucky—the Confederate stronghold on the Mississippi river.

Driver was taken prisoner during the Battle of Island No. 10 in early April 1862 and eventually spent time in the prison at Camp Douglas near Chicago. He was exchanged in during the summer of 1862 and returned to Tennessee where he saw duty as a medical inspector. He subsequently saw duty in Georgia, Alabama and Mississippi, serving as a surgeon at the Gen. Hospital at Cahaba, the union prison in Alabama, near the close of the war. A very complete biographical sketch of Driver is contained on the Find-A-Grave website.

Driver wrote the letter to the the officers of the 55th Tennessee (Browns) Infantry encamped at Columbus, Kentucky. The first-named officer was Major John H. Hilsman who had entered the service as Captain of Co. G. in October 1861 at Trenton. The 55th Tennessee remained at Columbus, Kentucky, until March 1862 when it was ordered to Island No. 10. The regiment was part of the garrison defending that stronghold until it was forced to surrender after a severe bombardment on 8 April 1862.

The second letter was written by John Madison Parker (1821-1875), a native of North Carolina who relocated to Tennessee in the mid 1840s and was employed as a Printer/Publisher in Jackson, Madison county, Tennessee, before the Civil War. He was married to Caroline (“Callie”) King McCutchen (1829-1905). In his letter, Parker endorses his friend, Alexander Jackson Brown (1835-1864) for Colonel of the 55th Tennessee (Brown) Infantry. Col. Brown was taken captive after the fall of Island No. 10 and imprisoned at Fort Wagner. When his health failed, he resigned his commission and he died at Jackson, Tennessee in April 1864 at the age of 28. Before the war, Brown had attended the University of Virginia and was practicing law in Jackson.

[Note: Both letters and the image of Capt. J. H. Greene were inherited by his descendant, John Narrin, and are published here by his express consent.]

The Hon. Wm. P. Morris  visits our camp at Columbus to remain some days. He is a gentleman of extra ability and prominence—is at present the senator from Henderson, Benton, &c. His every energy has been given to our cause—and could you induce him to remain and accept a position with us, I am satisfied that he would give as much character and do as much in securing the rights of the Battalion as any man we could get. I take great pleasure in introducing him to your favorable consideration.

With respect, gentlemen, I am your obedient servant, 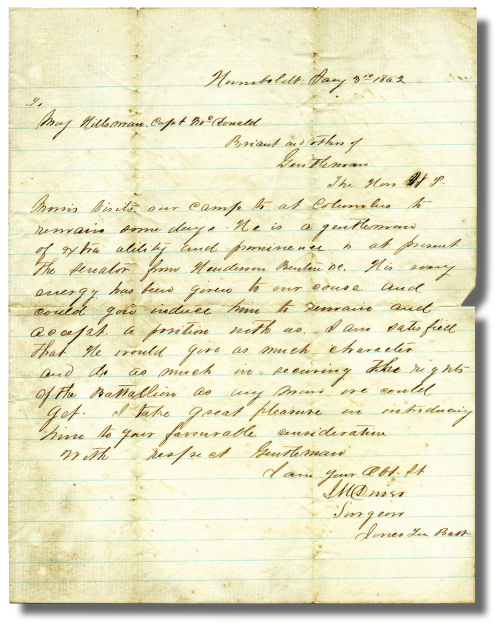 I learn from my special friend Lieut. Alex Brown, that you and him are about to become connected together in a regiment of volunteers in the confederate military service. He has informed us that you all have promised him the post of Col. in your regiment provided that he can bring these companies. It it depends upon a contingency of this sort, we have no misgivings about the result. He will bring the volunteers, no doubt. He is one of the most gallant and talented young men of my acquaintance, and I am glad to hear of his probable good fortune in becoming connected with you in the public service. You will all find that he will never falter under any circumstances that may surround you in the vicissitudes of war. He is connected with a family of large influence, and a regiment under his charge will enjoy some advantages, as you know, over other regiments differently circumstanced. I hope you all may succeed in your undertaking.