This letter was written by Marcus D. Rice (1844-1925) of Co. A, 2nd New York Veteran Cavalry to his Mother. The 2nd NY Veteran Cavalry (aka the Empire Light Cavalry) was organized at Saratoga, New York in 1863, and was mustered into U. S. Service from Aug. to Dec., 1863. The Regiment served mainly in Louisiana, participating in Banks’ Red River Campaign of March-May, 1864, and numerous raids and skirmishes. In March & April, 1865, the Regiment served in Florida and Alabama, and was mustered out at Talladega, Ala. on Nov. 8, 1865.

Rice’s letter includes a description of what has come to be known as “Davidson’s Raid” which began on 27 November 1864. Leading 4,000 troopers from Baton Rouge, Gen. John Davidson set out to sever the Macon & Ohio Railroad near State Line, Mississippi. The intention of this raid was to divert resources away from Gen. Hood’s operations near Nashville and to harass Mobile. During the raid, Davidson split his command, sending a small detachment of the 2nd New York Veteran Cavalry (Malcum Rice included), with the 1st Louisiana Cavalry, and a small detachment of the 11th New York Cavalry under the command of Lt. Col. Asa Gurney north via Leakesville to destroy telegraph lines and a bridge on the M&O at State Line. The engagement that ensued was the Battle of McLeod’s Mill.

I thought I would drop you a few lines to let you know that I am well and have been gone on a raid for seven weeks. We left Morganza and went to Baton Rouge and then we started for the Mobile & Ohio Rail Road. We were six weeks in the saddle. We had eight thousand cavalry and two batteries. We got within ten miles of the road and it was so muddy that we couldn’t get there with our big guns and men, so the General sent two hundred & fifty of the best men in our regiment to burn a bridge on the railroad & they had a big fight. They got within three miles of the road when they came on to twelve hundred men with six pieces of guns. They didn’t know how many there was of them, so the Colonel ordered the squadron to charge them. They broke three lines of the rebs and took [an] ambulance and four prisoners and killed about twenty, but when we got up to the next lines, we couldn’t break it, so we had to get back the best way we could.

We had three rivers to swim before we got to the rest of our command, but we got back with but a small loss. We had one Orderly Sergeant [Theodore Moss] & one Quarter Master and one Private [James Woods] killed in my Company, and one Lieutenant [Albert Westinghouse] in Co. B, and some others. In all, we lost six killed & fourteen wounded. The General gave us great praise. He said it was the first saber charge that ever had been made in this department. ¹

But the best of all, I went in the fight. The General had the Major in command of the Pioneer Corps, so I was with him. He had to build a corduroy road  for the wagons to get through the mud. We was in the wood for three hundred miles. They called them the Pine woods. We went through three or four little cities. We was three days without seeing a house. We were two days without grub or feed for our horses. We got through alive, but we had a bad time of it. We camped at West Pascagoula on the sea shore three days. We got grub there. We got orders to come to New Orleans, so the Major got leave to come on the first boat. I am at the Government stables and have a good place to stay. We expect the regiment any day. Then I don’t know where we will go.

My Colonel has gone to Morganza [to] get the top mounted men ready to join their regiment. I expect there is some letters there for me, but as I had time, I thought I would write a few lines. If you don’t hear from me again in months, or you expect I have gone again, you needn’t be alarmed. The General’s name is Davidson. We came from West Pascagoula on a Steamer—George Peabody. She was a good ship. We was five days on her. I was glad to get here.

I am well, but I am very poor. My weight is 110. I haven’t been so light since I left home. Give my love to all. I shall have to close by bidding you all a Merry Christmas.

¹ An unidentified trooper in Co. B, 2nd New York Veteran Cavalry also wrote of the engagement, saying, “by this time we was in sight of them. There was as we could judge from 100 to 150 [rebels] and the lead flew faster than I had seen it before. They kept falling back and they had support to fall in with them as they fell back. We kept them going back about 2 miles [when] the major told our Lieut. [Westinghouse]—he was in command of the first squadron—to draw sabre and charge on them & [ordered] Capt. Dolan to support us. At the word, “Draw sabre,” we pulled the bright steel blade for the first time in a fight [and] at the word, “Charge!” we put spurs to our horses and our 1st Lieut. says, “Boys, follow me!” swinging his sabre at arms length above his head. The smartest horses got into there rear and the last blow our Lieut. made struck a reb in the back which fetched him to the ground. [But] another reb was in the front of our Lieut. [who] drawed his revolver [and] shot the Lieut. through, about half way from the pit of his stomach to the hollow of his neck. He dismounted his horse, took his hat in his hand, [and] started back. When I met him, he said, “Go on boys, I’m shot.” He soon died. We drove them until we seen their line of infantry [at which time] we was ordered by Capt. Dolan to return. When we came back, Charley & myself with two others took up the Lieut. [and] carried him back with us a quarter of a mile [and] laid him down. He was too heavy. The most of our men that was there at the end of the charge was Co’s. A & B and a few from other Co’s. I don’t think we numbered over 40 men in all. The rest was back over a mile in the rear. We captured 4 rebs, one ambulance, and two mules. [We] took the ambulance and got the Lieut. Took him with us and we marched back, took another road down the river road some 25 or 30 miles, and very still I can tell you, and encamped for the remainder of the night. Those captured men said that they knew that we were a coming & they were sent to stop us from the railroad. They were one Brigade of about 1500 that we run upon in the front of us. Then there was an other Brigade sent down another road to come up in the rear as they [were] expecting the whole army was there…. Our loss was in Co A, 2 privates killed, one missing; Co. B our 1st Lieut. Westinghouse killed, 1 private David Bennett wounded—the Doct. said he would not live until the next morning, 1 private Co K. killed. What we could see of the rebs that was killed was about 15. We had a guide with us [who] used to be a rebel Colonel and he said he never saw a bolder and better charge made in all his time of service and those that we captured said that they had heard of the 2nd Vets & they never wanted to come in contact with them again for they was never drove so before and by so few men as we had in the charge. The guide said that regt. was called the best regt. they had in there service—it is the 2nd Missouri.” 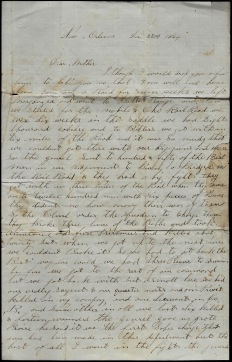