This letter was written by Benjamin Shaw (1840-1866), the son of Ephraim Shaw (1788-18xx) and Margaret Good (1815-1848). Benjamin wrote this 1862 letter while serving in Co. G, 1st Pennsylvania Reserves (30th Pennsylvania Infantry). He enlisted as a private in that regiment on 6 June 1861. The following is a summary of the regiment’s movements up to the date of this letter, written on the day before they participated in the Battle of Mechanicsville, the first of the Seven Days’ Battles:

Apparently Benjamin served with the Reserves until he was discharged on 15 March 1864 to “accept a promotion” but I have not found any record of what that promotion was. I did, however, learn that Benjamin married Mary E. Smith (b. 1841) in Trenton, New Jersey on 5 May 1864 but he died less than two years later. His death was given as 13 April 1866 in Lumberville, Bucks county, Pennsylvania. Three years after Benjamin died, his wife married Capt. George W. Ely.

Benjamin’s letter suggests he was member of the Religious Society of Friends (Quakers). He wrote the letter to his friend Hugh B. Eastburn (1846-1915) who also grew up in Solebury, Bucks county, Pennsylvania. Most likely they both attended the Solebury Monthly Meetings together as boys.

Were I unlike any other mortal and knew what tomorrow would bring forth, I would defer writing to thee till then for I feel so dull and stupid that I can scarecely sit up. But as it is, it must be done or perhaps left undone for weeks. Just two weeks ago today the good steamer Canonicus ¹ brought me to this part of Virginia where I’ve long wanted to be. Since that time we’ve been “roughing  it” truly. We occupy the advanced position on the right of the “Army before Richmond”—-a few cavalry regiments supporting the pickets being all the troops between us and the Virginia Central Railroad.

Our batteries exchange shots with the enemy every day. This dueling, though fun for them, is rather unpleasant for us for the enemy’s shells—though usually falling short—occasionally come into rather close proximity to our camp. Sometimes they pass entirely over us. A shell fired at a balloon which makes daily ascensions a quarter of a mile in our rear, one day last week exploded close by General Reynold’s quarters but fortunately did no damage. Last First day, our regiment supported by the 8th went on picket within 40 yards of those of the enemy. They were quite friendly, exchanged papers with us, and complimented us on our superior dress and arms but said it was impossible for us to take their capitol. When we put a fresh man on post, they would raise their guns just to try his pluck.

The second night we were on, all had to keep concealed as the 10th Alabama was on (they were the boys the Reserves handled so roughly at Dranesville). Several shots were exchanged but no one was hurt on our side. They only put troops from the Gulf States on their outer posts as others will desert if put there. A Georgia man came over to us 2nd Day night. He said he had paid $5.00 to get his post and that the whole regiment would come over the first chance.

We are not allowed to have any lights in camp and our bands and drums are kept quiet so they may not know our numbers and position. It is believed they are evacuating. A great deal of smoke has been seen for the last two days in the direction of Richmond and no tents are in sight here. They have at least fallen back. I was in hopes they would make a stand here and let us wind up the rebellion with one good strong pull.

A great many are sick in our army—particularly on the left. The country along the Chickahominy is one vast swamp with diseased enough in its bosom to kill the whole human family, soldiers excluded. Springs are scarce and the water in them villainous. Another fruitful source of disease is the innutritious food we receive (I object to this one more than the others for it is more easily remedied). Here is “bill of fare.” Judge if I’m not right. “Hard tack,” “Salt Hoss,” and Coffee. Nothing more nor less. How many of the gallant “Home Guards” think thee would be content with this fare? I don’t know that I should complain though for I’m hearty as an ox, though somewhat reduced in weight. If I’m shot at all, it will be by chance. No main can aim close enough.

Am I to infer from a remark thee made that any of your far damsels would be sorry to have me strangled? Really, I had begun to think they had all forgotten I once had “lived, moved, and had my living” in Old Solebury. If there be any such, let her speak, for her shall I reward (Antony with a slight variation).

I saw Ed White while at Fredericksburg. He was well and hearty then. I believe their Battery has returned to that place again. As I’ve had no sleep of any account for three nights, I hope thee will excuse my dullness.

Direct as before to Washington

¹ The steamer Canonicus transported the 2nd Pennsylvania Reserves along with five companies of the First and Eighth. “She was rather crowded, and by the time we got ourselves laid out for the night, there was scarcely a square foot of deck unoccupied,” wrote one member of the 2nd. The men debarked at White House Landing on the York River where they began their advance up the peninsula. 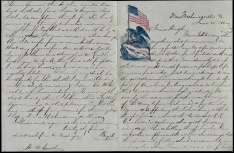