This letter was written by Edwin Warren Moise, a South Carolina native, who “raised a company of men for the Confederate army in Columbus, Georgia, where he resided. Known as the “Moise Rangers,” it was one of the few Confederate companies named for a Jewish Confederate. A captain, Moise served with the 7th Cavalry under Gen. Wade Hampton and was one of the commanders of “the Great Beefstake Raid” in 1864.”

Capt. Moise surrendered with Wade Hampton at Greensboro, North Carolina. He “returned to Columbus, Georgia, but saw no future there and then moved to Sumter, South Carolina, where some of his family lived. He built a law practice, went into politics, and wrote for the local newspaper. He became one of the most successful trial lawyers in the region and a noted orator as well. A physically powerful, energetic man, he was a natural leader who campaigned effectively for his many political friends.” [Source: “The Jewish Confederates” by Robert N. Rosen.]

Edwin wrote the letter to Seaborn Jones (1788-1864), a Jacksonian Democrat who served in the 23rd Congress and again in the 29th Congress.

Your letter by Mr. Cox has come to hand. When Col. Claiborne arrives in camp, I will apply for leave to go home for a few days when I will settle my business with you. I can see no reason for the manner which you have acted towards me. You have shown a distrust of me which I never deserved.

I hopw you will now remain in peace until I come, which will be in two or three weeks and then I will show you how groundless and unjust has been your complaint of me. Till then, I remain yours respectfully, — E. W. Moise 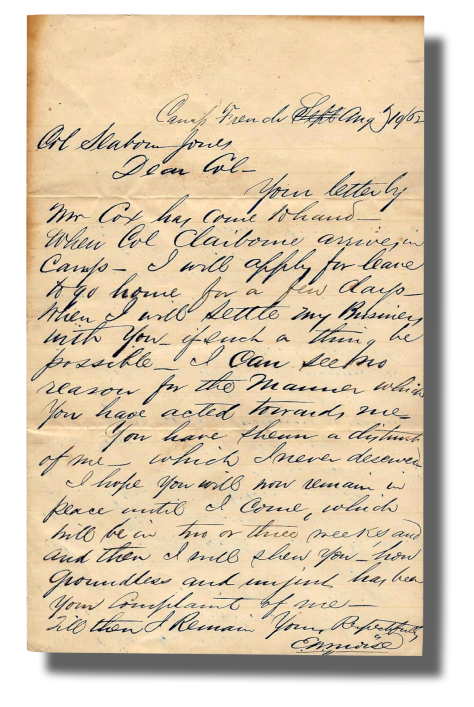 One thought on “1862: Edwin Warren Moise to Seaborn Jones”