I will try to pen a few lines hoping they will find you well for they leave me in good health. There is no hopes of my getting out of the army at present for Veterans has but a poor show now-a-days. I hear that the 2nd Connecticut Artillery has gone home and mustered out and I have heard that our regiment was soon to start for Washington but I fear that I have heard wrong yet, I hope not for I want to get out of the army, but but what it pays well ,but I am tired of it and had rather be at work at some thing now and then but I want to stay a month or two longer [before] I am discharged for if I mistake not, I am in debt for clothing about thirty dollars yet and I don’t know when I was paid up to in March last. But I think that I was paid up to the first of January. If so, I have got six months pay coming and my bounty of one hundred and ninety dollars and the six months pay is one hundred and sixteen more so in all I have, if I am right in my thoughts, three hundred and six dollars so if I take out thirty dollars for clothing over drawn, and fifty more for a new change of clothing to come home in, I will have two gundred and sixteen dollars left to go to work on when I get home.

I don’t know what it is that troubles you about this but I feel just like it tonight and I must bother you in some way and I have nothing else to write about. I wish that they would send me my descriptive list. Then I could tell just how I stand in the army. I wish that it was so that you could come out here for I have a splendid big room all to myself, and we could take as much comfort here as we could if we was at home with board and doctor’s bills free. But the doctor don’t know enough to doctor a sick kitten and if I had a sick cat, I would kill it before I would let them try to cure it. If a negro is sick, they will try and cure him, but if a white man is most dead, he can get no help from him. I hope that I can make both ends meet before I get out of the army for I am trying hard to do so. I have got four pairs of drawers, three shirts, two good pairs of pants, a good rubber blanket, and a good woolen blanket. The blanket I would not take ten dollars for if I had it at home, and the rubber one I would not part wit at any price. And the shirts and drawers are as good as any that I can get in the country. Two were for fifteen dollars and the pants I have to wear. So if I don’t get home soon, they will be of no use. But if I do, I can get htem dyed for most nothing and they will be as good as any to work in that I would have to pay five dollars a pair for at home. But if I keep on, you will become a little misses as I used to call you. Paper is running out so I will have to stop for tonight.

My love to all. I hope that you will write soon. Good night. 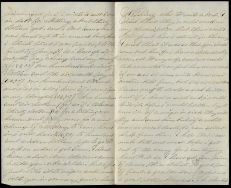