This letter was written by Richard Russell Dozier (1851-Aft1881), the son of Richard Henry Dozier (1815-1861) and Ann Elizabeth Dozier (1826-1868) of Enterprise, Clarke county, Mississippi. Richard’s father was a medical doctor and attended to sick Confederate soldiers of the 5th Mississippi Volunteers during the Civil War. He had two older brothers, 2nd Lt. John Thomas Dozier (b. 1846) and William David Dozier (b. 1847) that fought with Mississippi regiments.

In 1872, Richard was listed in the St. Louis City Directory as a bookkeeper at the National Loan Bank. In 1875, he was registered as a voter in San Francisco; his occupation given as a seaman. In the 1880 US Census, he was enumerated as a clerk in Denver, Colorado. 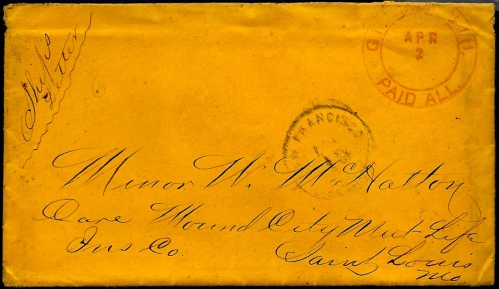 About three months ago I shipped on board the above named vessel in San Francisco to go on a whaling course to the Arctic Ocean to be gone 12 months. The ship sailed so within a few degrees of the North Pole. In fact to the very heat of navigation during the last three months we have been cruising on the line or equator sperm whaling. We caught 5 of the monsters which made us one hundred & fifty barrels of sperm oil. I have got the 125th lay—that is, out of every 125 barrels of oil, I get one barrel. If in the next 8 months we have good luck in the Arctic regions whaling & walrusing, I expect to make some money & if not, why I am out so much time—that’s all.

I have seen many thrilling sights since I left Frisco, I can tell you, & expect to see many more during my voyage to the North Pole. I seen land this week for the first time in 2 months & when I leave here, I don’t expect to sight land again for the next 7 months.

The ship is signed to be back in Frisco by the 15th of November next. I would like to meet you there at that time. We can go down in lower California & make a good stake & then settle down. Boy, if you don’t risk anything, you certainly will never gain anything. I am still anxious that we should tie together for I believe between us we could make money. I have found out one thing during my travels & that is if a man expects to make a fortune, he has got to work for it. There is no place like America in my estimation to make it in. I have often heard a great deal about the Sandwich Islands but a man might as well be in hell as to be there—no much good as the Kanaka says. No, there is no money to be made on the islands.

Well, dear friend, pray for me while on this trip for it is full of danger, going right onto a whale in a small boat to harpoon the mountain of flesh is no fun, I swear, until after you have killed him. Then of course you can get out & take a stroll on him. Sharks by the thousands around all the time in case the boat should capsize to get a square meal off of your precious bones.

If you cannot meet November next in Frisco, have a letter for me there about that time. Address me care of the whale ship Marengo, S. Francisco, Cal. Write about the 1st of November. I expect to be back by the 15th or 20th. Well, tis near 8 bells & dinner nearly ready so I must close & may God bless & protect & prosper you is the prayer of yours fraternally, — Richard