This letter was written by John H. Slaughter (1838-1862) of Clarksville, Montgomery county, Tennessee. He wrote the letter to his older brother, Guilford Hamilton Slaughter (1828-1897). They were the sons of Henry and Sarah E. (Carter) Slaughter.

John enlisted as a private in Co. L, 14 Tennessee Infantry at Clarksville, Tennessee. During the Battle of Seven Pines on 31 May 1862, the 14th Tennessee was brigaded with the 1st Tennessee, the 7th Tennessee, and Braxton’s (Virginia) Battery (a. k. a., the “Tennessee Brigade”) under the command of Brig. Gen. Robert H. Hatton. This Brigade was placed in Gustavus Smith’s Division under the temporary command of Brig. Gen. William H. C. Whiting due to Smith’s illness; part of the left wing of the Army of Northern Virginia. During the battle, General Hatton was killed and General James Archer took command of the brigade which was subsequently transferred to A. P. Hill’s Division. The Tennessee Brigade, fighting in the misty twilight of evening in the swampy lowlands near the Chickahominy River suffered numerous casualties—44 killed, 187 wounded, and 13 captured or missing. Pvt. John Slaughter was among those killed at Seven Pines.

I received yours and Mother’s kind letters this morning by Dr. Bruster just from the regiment. They ought to have stopped here. I was glad to hear you were all well. We are all getting along finely. Dan is doing very well. Bob is getting fat again.

Brother, I am getting as fat as a bear. I weight ten pounds more than I ever did before. I think if we stay in the mountains this winter, I will get to 200 pounds. There is a great stir here now. The 7th Regiment (Tenn.) are camped here. The report is that they will winter here. Our regiment and the 1st are now at Huntsville cutting logs to build winter quarters. Mr. Barnes—the old man—got here last night and he says he thinks they will only stay there for a short time. General Donelson’s Brigade has been ordered to reinforce Floyd and our regiments will remain there to see if his force will be sufficient to reinforce Floyd, and if so, our regiments will move on this way. We heard that the whole army would make a general march to Winchester and from there they would march on Washington City, but there is a thousand reports current and we can never know when we hear the truth.

I was very sorry to hear of the death of Billy Parrish. I liked him very much. Jesse Allensworth has been with us for 2 days but left this morning for Millsborough. He will be back tomorrow and him and I will start to the regiment the next day. I intended starting today but he said if I would wait, he would go with me. I expect Uncle Tom and Aunt Eliza will start home shortly. I don’t know whether they can carry Dan home with them or not. Him and Bob are both very anxious to get home.

Brother, I got all my things you and Mother sent. I was very glad to get them. I would like for you to see us but I don’t want you to leave while there is so much excitement near home.

P. S. I send this letter by Mr. Robinson, a man of our company. He has a discharge. I wrote to sister E. and intended to send it by Mr. Moore but he left before it was finished and I had to send it by mail. When you write, direct your letters to the 14th Regiment Tennessee Volunteers, Va. That will be all that is necessary. Goodbye, — J. H. S. 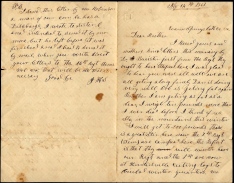 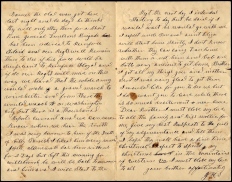