This letter was written by Charles H. Hall of Co. E, 11th New Hampshire Infantry. Charles enlisted on 15 August 1862 when he was 18. He was wounded at White Sulphur Springs, Virginia and again on 13 December 1862 at Fredericksburg, Virginia. He was discharged at Concord on 21 February 1863 on account of disability.

Charles wrote the letter to Alice (Nichols) Shannon of Hampstead, whose son, Pvt. Charles Henry Shannon (1833-1862) served with him in Co. E and was likewise wounded in the Battle of  Fredericksburg on 13 December 1863. From this letter we learn that Charles Shannon was wounded in the leg which began to bleed after he was transported from Falmouth to a Washington D. C. Hospital. Without a blood transfusion, he bled to death when the doctors failed to clamp the artery in his leg.

Readers will recall that the 11th New Hampshire was one of the regiments that took part in the costly assaults on Marye’s Heights on December 13, 1862, being assigned to the 2nd Brigade, 2nd Division of the 9th Corps. Lt. John Charles Currier of the 11th New Hampshire remembered it this way: “In the smoke of our guns and that of the enemy we push on, still on, towards the base of that hill. Great gaps are torn in the ranks; men are falling all around us; another and another line of battle comes charging up behind mingling their forces with ours; we struggle towards that stone wall that is belching out its hail of iron and fire; but all in vain, we cannot reach it. The line wavers suddenly, stops and shivers like some great ship that is beaten by a storm and recedes. Lie down is the command. We did not need any further orders, we just dropped to the ground and clung to the earth to escape that shower of lead…The warm sun had softened the earth so that it was nothing now but mud and water, but I don’t think we cared what it was, we only wished it was deep enough to cover us entirely, so that those devilish guns that were ripping and tearing the ground just behind might not reach us…Maryes Hill was one sheet of flame.”

Your letter of March 31 was duly received. I have been out to Virginia after my brother that was in our company. I have been gone fifteen days.

You wish to know more about [your son] Charles. He was getting along well at Falmouth. We started from there the 25th of December. We got to Washington the 26th. He was some tired when we got there. He begun to bleed that night past midnight the 27th. He found it out himself. He bled a great deal before he woke up. His wound was not probed before he begun to bleed. He bled by spells. Everything was done to save his life that could be done. He had the best of care and wasn’t left alone one minute, night or day. I don’t remember whether it was the 28th or 29th they cut for the arter[y].

Dr. Dorr is a nice man. He told me he thought a great deal of New Hampshire boys for he was from New Hampshire himself. Charles told me not to write about him. He thought he would get well so I didn’t write until he was dead. The last two days he was out of his head most of the time. It is nothing strange for a wound to bleed as that did. C. Chapman ¹ like to bled to death after he got to Washington. He was in our company from this town. I have no doubt but some is murdered by the doctors but I know Charles had the best of care and everything to nourish him that anybody could have.

He bled only by spells. When they went to cut for the artery, it stop bleeding. When he was in his right mind, he thought he should get well. I should have wrote to you before he died but he didn’t want you to know he was worse for he thought he would be better in a few days. It is a mistake about the doctors probing the wound before it bled for our wounds were dressed by the nurses the day we got there for there was no one of us considered dangerous. When we left the boat, he had to hop on one leg about 10 rods [@ 55 yards] to get to the coach that carried us to the hospital. That beat him out more than all the rest of the ride.

¹ Charles A. Chapman enlisted on 26 August 1862 at age in Co. E, 11th New Hampshire Infantry and was promoted to corporal in September 1862. He was wounded in the face at the Battle of Fredericksburg and sent to Carver Hospital in Washington D. C. before he was discharged on 18 February 1863 for disability. 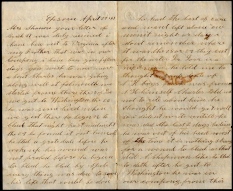 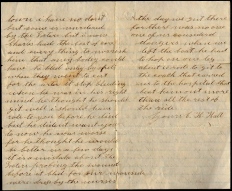