This letter was written by David J. Oberholtzer [Overholtzer] (1842-1891), a musician and later nurse in the 2nd Pennsylvania Reserves (31st Pennsylvania Infantry). He enlisted early in the war and mustered out on 10 August 1862.

It was written just following the 5 August 1862 “battle” (a mere skirmish really) in Virginia opposite the Point of Rocks, Maryland—a few miles below Sandy Hook. Five rebels were killed and 15 captured along with twenty horses. [Source: A Politician Goes to War, The Civil War Letters of John White Geary, page 5]

Accompanying the letter is a most interesting envelope illustration depicting a retreating Gen. Beauregard who was the Confederate leader at 1st Bull Run. I believe that the envelope was designed and printed some time before that battle when Union sentiments expected a rapid defeat of the Confederacy. So much for expectations.

David was the oldest son of huckster Jacob and Sophia Oberholtzer. In 1860, David was enumerated as a 17 year-old shoemaker in his parents home in Montgomery county, Pennsylvania. He married Esther Spare after the war and resided in Philadelphia

David wrote the letter to his friend, Abraham Reinwald Springer (1829-1869), a “Conveyancer” in Kulpsville, Montgomery county, Pennsylvania. Abraham died tragically in a train accident in 1869 at the age of 40.

[Note: This letter is from the personal collection of Richard Weiner and is published here by express consent.] 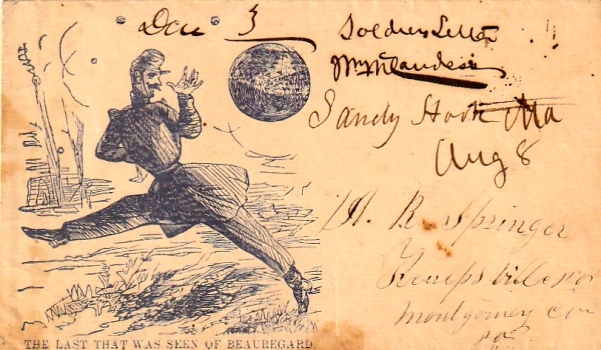 I will write you a few lines about camp life. We are at Sandy Hook one mile below Harpers Ferry. I am well and I hope you are the same. It was a great time last Monday [Aug. 5] when they had that battle at Point of Rocks, in our camp. We were all ready to march but we did not go. They got the prisoners in our camp but we will have some hard time one of these days. We have a great many regiments where we are. We have infantry, cavalry, and flying artillery in our camp.

Direct your letters to Knoxville Post Office in care of Col. [William B.] Mann. 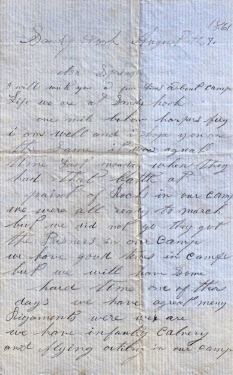 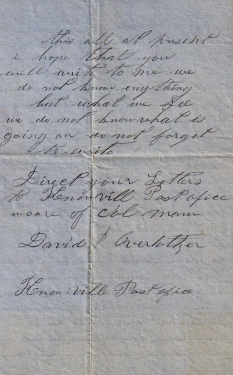