I will try to pen a few lines tonight for I am in very good health at present and I can thank the Lord that I am alive to write this tonight for I was sitting in a bomb proof when I wrote that last letter to you and had got it sealed up ready to go when the Rebs began to shell us and thinking that I was as safe as anywhere, I sat still. I has sat there but a few minutes when I heard a shell a coming. It came into one end of the proof and I went out of the other and while I was getting out, it bursted and a piece of shell got into the next part before me. If I had of been one second quicker, I think that I should of got hit. Now, if you love me, you can thank God that I am still alive for it is through His goodness that I am alive now.

I had made up my mind twice before to write to you and each time the Rebs began to shell us and I had to put it off. It is hard work to get postage stamps out here and if you want me to write, send me some stamps.

There has been a hard thunderstorm today and the rain filled our magazines full and if stories are true, there was two or three men drowned by the freshet. I guess it is true for there is a large hollow in rear of us that is full of camps and it was filled with water and tents and all was swept away by the flood. It was a hard storm but I think it was a good thing for the country. ¹

I have drank three drinks of whiskey tonight. We have whiskey rations now and my bed fellow don’t like it so I got his and mine and I had a friend just came and asked me to go up and drink with him so I stopped writing and went and took another drink. I don’t think it will hurt me for I am wet through for when it rained the hardest, I had to be out trying to save our powder and was up to my knees in water for some time and didn’t it rain sweet. And didn’t the bullets fly when it began to stop for it is the post that the rebs [like] to fire [on] as soon as it stops raining. But I guess that their powder got wet for they didn’t fire mortar shells at us this time.

Well Pet, it is night and I must close for this time. Give my love to Mother and the girls. Remember me to [  ]. As soon as you get that money I sent to you, let me know.

As ever your faithful husband, — Chet

Captain Baggs, then in command of the Third Battalion of the Second Pennsylvania Heavy Artillery, moved his command to the Ninth Corps front on the 14th of August, taking position just in rear of the “crater mine,” which was almost as hot a position as it formerly held near the City Point Railroad. On the 15th of August, during a heavy rainstorm, a dam at the breastworks, some distance up the ravine in which the regiment had its camp, gave way, causing a rapid rise in the stream and not only washed away all the camp’s equipage, but caused the drowning of some two hundred soldiers who were camped some distance further up the ravine and were caught in the sudden rise of the water, mostly of whom were colored troops. Many were seen floating down the current on logs, but were unable to make shore, and were carried to the railroad bridge, where, striking the stone abutments, would become entangled in the jam of logs there and be either killed or drowned.

Lieutenant Colonel Benjamin F. Winger, in a letter, referred to the flood and his experiences as follows: “A funny, yet sad thing occurred at the time of a big Virginia flood in, the ravine in the rear of Fort Steadman, in 1864, where we had our main headquarters. Several sutlers tents were in this ravine, and their whole stock was flooded down the stream towards the Appomattox. A number of cases of champagne were seen swimming along, and an old sailor jumped in and got a case. An old soldier seeing it, also jumped in, and attempted to capture two cases, but failed, for, although a good swimmer, the swift current of the waters carried him down to the railroad bridge, where, being caught and fastened in the debris, he was drowned (p.96). —George W. Ward, History of  the Second Pennsylvania Heavy Artillery (112th Regiment Pennsylvania Volunteers), from 1861-1866, Including the Provisional Second  Penn’a  Heavy Artillery. 1904.

15 Aug. ’64. The great shower, so disastrous in some parts of the line, occurred while the 23rd was in the front line. Here they suffered no greater harm than a thorough wetting, which, however, was more endurable in the open than in the bomb-proofs whose leaky roofs streaked them with yellow mud. The rain, moreover, filled the excavations, turning bomb-proofs to cisterns and zigzags to canals, thereby giving those who must move from place to place the choice whether to be drowned or shot. In one place, our boys got some satisfaction by helping the accumulated waters cut a new passage through a low place in the works and pour out upon the rebels, who, just there, occupied lower ground. In the camp, or, more particularly, in the ravine in front of it, the damage was much greater. The protection afforded by the high, steep sides of the ravine from the direct fire of the enemy, was very enticing. Some regiments and some sutlers, failing to notice the marks of former freshets, or, lightly discounting the risks, had pitched their camps, mostly shelter-tents, and established their shops. Over most of these, shelters from the sun, made of green boughs laid on frames of poles, had been raised. Even towards the hilltop, where the 23rd had its little camp, the rain was heavy enough to wash away all lighter articles and present to the men returning that night from their tour of duty in the “pits ” a scene of wild confusion. He was lucky who could find even one corner of his shelter-tent still in sight and could thus rescue it from the overwhelming mud. In the ravine, the water running from all the neighboring heights soon became a raging torrent. It swept away camps and shops like straws in a gutter. It rolled army wagons over and over before it. It swept away a section of the railroad bridge. Men, caught sleeping in their tents or hampered by the fall of the leafy shades, were helpless. Nor could those on the bank render much aid, for the torrent carried their luckless comrades away as fast as they could run along to their rescue. Some, who, after the first rush of the angry waters, ventured in to “save” the coveted goods of unlucky sutlers, found themselves in a dilemma which was not without its danger. The current was still strong enough to make it impossible to climb the steep clay banks without help. Some accounts assert a loss of 40 men. I do not learn that this included any one from the 23rd. It is said that a man, with difficulty saved from very imminent death by drowning, was immediately killed by a stray rebel bullet piercing his brain (227-228). — James A. Emmerton. A Record of the Twenty-third Regiment Mass. Vol. Infantry in the War of the Rebellion 1861-1865.  1886. 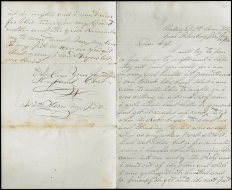 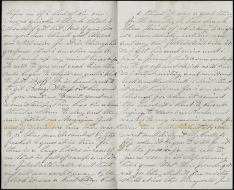