This letter was written by Sgt. James Reid who enlisted as a private in Co. B, 79th New York Infantry (aka, the “Cameron Highlanders”) in May 1861 to serve three years. He rose in the ranks from private to first sergeant before being commissioned a 2d Lieutenant of Co. H, and then a 1st Lieutenant of Co. I. He resigned his commission on 28 April 1863 at Lebanon, Kentucky.

Reid was born in England in 1835. He was married to a woman named Lizzie, born 1843 [died 1895, age 49?], in Ireland. In 1863, Reid is found in the New York City Directory at the address given on this envelope; his occupation was given as “Malster” — a maker of malt. After the war he went into business as a liquor importer and distributor under the name of James Reid & Co. with a store at No. 45 Broad Street. It appears that he used his profits to invest heavily in land speculation, however, and went bankrupt in 1878. By 1880, James was keeping a candy store in New York. It is believed that both he and his wife died before 1900.

When this letter was written in early July 1861, the Highland Guard was at “Camp Lochiel” near Meridian Heights in Washington City. A few days later they went to “Camp Weed” near Alexandria, Virginia. A couple of weeks later, the regiment participated in the Battle of Bull Run where Sgt Reid was taken prisoner and spent six months in a Confederate prison near Richmond. There is a story posted on Civil War Talk alleging that Sarah Emma Edmonds (who disguised herself as a man and enlisted in the Army of the Potomac) fell in love with Reid and deserted about the same time that Reid resigned his commission in 1863. See Lt. James Reid.

In this letter, Reid tells his wife of an encounter with two other members of his own company that attempted to kill him.

My Own Dearest Wife,

I received your letter telling me about the box containing Bob Leishman’s things, and was glad to hear that all was well. We are now settled down in our new camp and I enjoy it a fast deal more than I did our quarters at the College.

We have good tents to live under and each Sergeant has charge of one containing 10 men, thus making it much easier. I have got the best and neatest tent in the camp and the most orderly lot of men, each of whom I believe would almost lay down his life for me—although there are some ugly dispositioned fellows among us.

One of our men [William Holmes of Co. A] was murdered the other night [30 June 1861] in Georgetown by one of our own Regiment. Poor fellow—he received 3 stabs through the left breast and was dead in an instant. I nearly got my life taken by one of our company last Wednesday. Two of our men got fighting in our room and I, being the only sergeant present, went to separate them when one of them turned and dragged me to the floor. We got up again and he struck at me when I immediately knocked him down. Then he got a musket and bayonet and made at me to run me through but one of the 6th Company fellows wrenched that from him and then I got hold of him again and had him right and tight when a companion of his came behind me and cut my head open with a metal canteen filled with water. Both of them have been in the guard house ever since awaiting their trial. They will be tried for attempting the life of Sergeant J. Reid, which crime is punishable with death.

I am glad to tell you my head is almost well. The cut was about 3 inches long.

I hope you received the 6 dollars I sent you. I would have sent more if I had it, but we only get paid for [   ] May and that from the 1st of May, the day we were sworn in till the 1st June. We expect to get paid for the month of June some day next week. I shall send it to you.

I was very very sorry to hear of Mr. Hodges death. Tell Maggie I sincerely condole with her and hope that God will give her strength to bear up in the severe trial. Do all you can to help and comfort her, my dear Lizzie and I will love you the better for it. Well do I know what it is to lose a Father and well do I know the value of comforting words from a true friend.

I scarcely know how to express my thanks to Mrs. & Mr. Carville for the kind interest they take in you and my little darling Kitty. Tell them from me that I shall never forget it.

So it was [  ] who got the revolver after all. I have never seen or heard anything about it here. You must make Adam’s pay the value of it. If I had had it, when I got my head opened, it would have been of service. So dear Lizzie, do look after it now. I require it.

We expect after Congress meets to get orders to march to the attack.

I have nothing more to say at present, only write soon. You don’t know how precious a letter from you is to me. Kiss my darling Kitty as thousand times for me and believe me to be ever your affectionate husband, — James Reid

I expect in the course of a fortnight or so to be promoted to Orderly Sergeant. That is next to the commissioned officers. 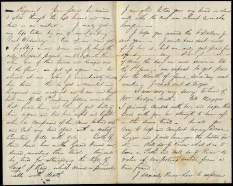