This moving sympathy letter was written by Francis (“Frank”) Alexander Sinclair (1834-1918), Captain of Co. L, 9th New York Heavy Artillery. Capt. Sinclair was from Mottville, Onondaga county, New York. Frank joined the regiment in September 1862 as a sergeant in Co. I and was commissioned the captain of Co. L when it formed in November 1863. In 1864, after Grant ordered the Heavy Artillery regiments into the field as infantrymen, Frank was wounded in action before Petersburg on 18 June and according to a grandson, the captain borrowed a horse and rode all the way home from Virginia to avoid hospitalization and a certain leg amputation. Military records indicate that he was discharged from the service in November 1864. After his recovery, he returned to the chair making business in Skaneateles, New York.

The letter was addressed to Margaret (Weeks) Sayles (1838-1912), the widow of John B. Sayles (1830-1864) and a brief member of Sinclair’s company before his death on 7 March 1864. Records indicated he died from pneumonia while recovering from a bout of the measles.

The second letter dated March 30th was penned by Capt. Sinclair in response to a request by Margaret Sayles asking for his support in obtaining the bounty that was due her deceased husband.

What can I say to you to lighten your affliction—I feel the hopelessness of my task. But I thought I must say a few words to assure you that others here mourned with you, and your little one, now fatherless.

Mr. Sayles was comparatively a stranger to the company, but it needed but a slight acquaintance with him to respect and love him. I had no man in the company that I should feel their loss so much as I do his, and I have many good men. All who came in contact with him were impressed with his goodness of heart, his high moral principle, and his bright, cheerful spirit, supporting him through all his severe trials here—brighter and more submissive to the last. I had never felt him dangerous or thought we must give him up until yesterday morning for he always met me with a smile and I did not realize his situation. By his death, we lose one of the best members of our company and the Government a true defender.

You have our fullest sympathy in your great affliction. And may the good God watch over you and your little one in his mercy, bring you to see that it was to serve an all wise purpose that He has taken your helpmate from you, is the prayer of yours truly, — Frank A. Sinclair, Capt., Co. L, 9th N. Y. [Heavy] Artillery 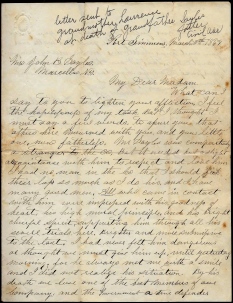 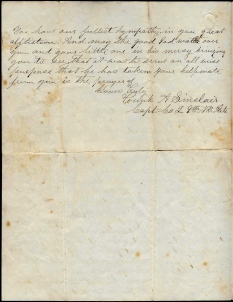 Yours came to hand yesterday. I would gladly aid you if I could in collecting John’s bounty but it should be done by a U. S. Agent. I would recommend you to Robert Trowbridge, Esq., Syracuse, N. Y. who is engaged in such matters altogether and is well informed how to proceed.

You need make no excuses about intruding on my kindness if we are strangers for as you say, it does not seem so to me. There was but little I could do for your husband, but I don’t know what I wouldn’t have done for him—he was so kind and good, so different from the other men. How I prayed that he might be saved for I would always have felt that I had one man who would have stood by me to the last. When I used to take him any little nicety I could get, he was so grateful the tears would start in spite of me & he wished that he might recover to show how he thanked me. You and your boy will miss him much for he must have been a kind husband and father.

I would have sent for you to come had I known how ill John was but he was so cheerful and so thoughtful of you that he did not wish you to take the journey alone. I know it would have been a great satisfaction to you to have seen him before he died for it’s a pleasant thought among the many sad ones (upon the death of our dear ones) that we were with them to the last—that their last look was at us & that we received their last farewell.

Our regiment is divided and I have not seen Mr. Smith lately. Will comply with your request as soon as I meet him. Should I be spared to visit New York State again, I will be pleased to accept your kind invitation and if I can be of any use to you, do not be afraid to ask any time. Hoping this will find you and your little one in health & prosperity, I remain yours respectfully, — Frank A. Sinclair 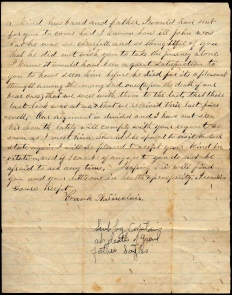 One thought on “1864: Francis Alexander Sinclair to Margaret (Weeks) Sayles”