I will just write a few lines to let you know that I am all right and that I wish you well. I shall be ten months in on my second enlistment tomorrow and will be twenty-seven on the 23rd and I hope McClellan will be our next President. The Rebs are very fast to get our papers now to see who is nominated and they have been exchanging now for two days.

4th — I will now try to finish this and send it on to you for you must want to hear from me by this time. But why don’t you write, pet? I have not heard from you for some time.

They hung a man in the Seventh Regiment yesterday for murder. ¹ The Sixth Regiment is here now and I will try to see Willard Potter in a day or two.

There is no news of any account for me to write—only there was very great cheering when the news came that McClellan was nominated. Bully for Mac! I only hope that he will be elected in November. They have been exchanging papers again today but they won’t trade with us on account of our having niggers in front of us.

5th — Last night I had to stop writing for I was too hot to write and at night we fired a salute of six shells into the City to let the Johnny’s know that we had got Atlanta and we had some pretty hot firing before we got through for they opened on us with about a hundred guns and mortars but they could not stop the boys from firing the salute. It must be awful for women and children to go to bed and get woke up with a shell bursting on the foot of the bed and to find it raining iron all over the city.  I almost feel as if I was a murderer sometimes for one of our shells killed four women one night.

There is no news so I will close though with my best love to all and to you in particular. good night Lolly.

P. S. Send me some stamps and if it is possible, send me a dollar for I am out of tobacco. — Chet

¹ The 7th Connecticut Infantry soldier executed by hanging was Pvt. John Rowley of Ridgefield, Connecticut. He was convicted of purposely murdering a fellow soldier named Jerome Dupoy by shooting him in the head during the Battle of Olustee in Florida. 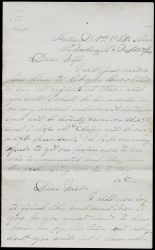