On 14 March 1864, William resurfaced in Racine, Wisconsin, accepting a bounty to serve in Co. H, 4th Wisconsin Cavalry. He remained with the regiment until mustering out at Brownsville, Texas, in May 1866. When he sought admission to a home for disabled volunteer soldiers as a retired machinist in 1904, he told them he was born in Canada and only gave his service in the 4th Wisconsin Cavalry.

It is with a degree of pleasure that I now sit down to scribble a few lines to you to let you know that I am well and hope when these few lines reaches you, they will find you enjoying the same blessing.

Well, we have got to our journey’s end for awhile. We had a nice time a coming down. When we got to Chicago, we stayed there all night and a part of the next day. When we got to St. Louis, we stayed there three days. We had some gay old times there. That is a great old town. The streets is about twenty feet wide. We would go down town everyday and stay there till night. We had some beer a coming and how do you think we got it? Well we stopped to a station and stole two kegs of beer and shoved them in the cars. We tapped one of them and got it about half drunk up and one of the officers came along and throwed them both out of the cars so we have not had any since. You cannot buy whiskey or beer anywhere along the river. They dare not sell it to soldiers.

Things is cheap here. Butter is only sixty cents a pound and eggs ninety cents. We have good living here—better than in Camp Randall a darn sight. We stopped a little this side of Island Number 10 to wood. I and two or three other boys went and stole some eggs from the rebs. They seen us but they dare not say a word to us.

We are camped about a half a mile from the river almost in the town on a large green field. The grass is about six inches high. It is fine weather here—not very warm or very cold.

Well, did you go to dancing school the last night? Oh how I longed to be there. I was to a dance in St. Louis. We had a gay time. Nell is not with me, He did not get paid when I did so he could not come. My name was called on to go and so I had to leave him, but he will be along in a few days. I am a little lonely without him. Will, how is Miss Bery and Miss Yates? Give my respects to their best half [and] a good share for yourself. Well, I must close so goodbye from your ever friend, — W. W. Billings

Direct your letter to W. W. Billings, Co. H, 4th Wisconsin Cavalry, Baton Rouge, Louisiana. Write soon, You will, won’t you? I know you will. You don’t know how much good it will do me to get a letter from you or any person. 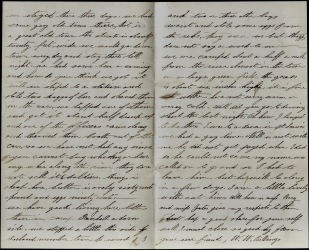